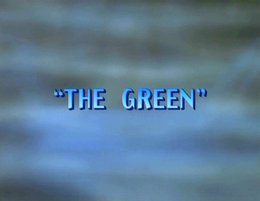 "The Green" is the fifty-first televised episode of the series Gargoyles, and the thirty-eighth episode of Season 2. It originally aired on February 15, 1996. 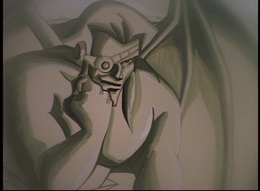 The travellers arrive at ChacIxChel, Guatemala, where they meet the four members of the Mayan Clan, who are embroiled in a war with a logging company in order to protect their forest home. Preston Vogel hires Jackal and Hyena to stop the gargoyles from terrorizing the loggers, and the twins formulate a plan for Hyena to destroy the magical sun amulet that prevents the Mayan gargoyles from turning to stone at dawn, while Jackal distracts the gargoyles by destroying trees and setting a fire in the forest. Jackal plans to destroy all of the stone gargoyles at dawn at his leisure. Their plans fail however, and Vogel decides to cancel the Cyberbiotics rainforest operation.

Elisa and Goliath have differing opinions on the Mayan gargoyles' plight. Elisa thinks they should find out who legally owns the rainforest, while Goliath agrees with the others that the humans must stop cutting down trees.

Hyena goes back to Manhattan to destroy the Mayan Sun Amulet at the American Museum of Natural History. Broadway and Lexington prevent her from doing this, and bring the amulet to the clock tower.

Elisa comes up with an idea to help the Mayan clan by transporting two of them to Avalon so that they could transplant selected samples from the rainforest there.

Preston Vogel appears for the first time since "Golem". He next appears in "The Gathering Part One". This episode is the only one in which Vogel appears without Halcyon Renard.

Lexington and Broadway appear for the first time since "Pendragon". They next appear when the Avalon Travellers reach home in "The Gathering Part One".

The Manhattan Clan takes possession of the Mayan Sun Amulet. This is the third time that the clan has taken a magical item in order to keep it out of the wrong hands (after the Grimorum Arcanorum in "Enter Macbeth" and the Eye of Odin in "Eye of the Beholder"). Goliath also made a similar vow to protect the Eye of Odin and the Phoenix Gate in "Avalon Part Three" (although Goliath has already used both items prior to this episode, and the Eye has been effectively destroyed).

Officer Morgan is one of the policemen who arrest Hyena at the end of the episode. (Hyena will be broken out of prison, off-stage, by Jackal at the end of "Phoenix".)

Zafiro's serpent-like design is modelled after the figure of Quetzalcoatl the Feathered Serpent in Mesoamerican legend, suggesting yet another mythical being inspired by gargoyles. It is worth noting, however, that in Mesoamerican art and myth the Quetzalcoatl only has the feathers of a quetzal bird, not wings.

Greg Weisman had further plans for the Mayan gargoyles' adventures in the series. They would have eventually gotten the Mayan Sun Amulet back from the Manhattan Clan (it survived the destruction of the clock tower in "Hunter's Moon"). Turquesa and Jade, who ended the episode on the skiff to Avalon, would probably have experienced a few "World Tour" adventures of their own before Avalon sent them back to Guatemala. Also, a namesake descendant of Zafiro would have been one of the regulars in Gargoyles 2198.

Zafiro and Obsidiana also re-appeared in the apocryphal "Religious Studies 101: A Handful of Thorns".

Hyena hitting her head against a statue and being knocked out at the end of her battle with Broadway and Lexington is cut. Instead it cuts from Broadway throwing her straight to the next scene.