Difference between revisions of "Hunter's Moon Part One" 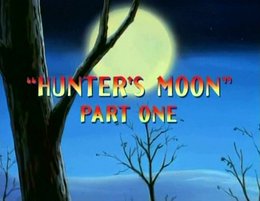 "Hunter's Moon" Part One is the sixty-third televised episode of the series Gargoyles, and the fiftieth episode of Season 2. It originally aired on May 13, 1996.

Elisa is temporarily partnered up with the Hunter, Jason Canmore, who is posing as a detective to find out more about the gargoyles. While patrolling in Elisa's car, they happen upon thieves stealing DI-7 from a Xanatos Enterprises warehouse, and a car chase ensues. The thieves are arrested, but one escapes and informs Demona, (as Dominique Destine), of what happened. Elisa seeks the clan's help in guarding the two locations where the chemical is stored. The trio and Bronx encounter Demona at one of the warehouses, and she retreats with a canister of DI-7. Goliath, Hudson, and Angela keep watch at the second location, and are attacked by a trio of Hunters who have expected to find Demona there. Angela is badly injured in the fight, and Goliath swears vengeance.

Gillecomgain is established as the first Hunter when Demona scarred his face, as was shown in "City of Stone" Part One. Gillecomgain's father is introduced, showing himself to be a cruel man, but correct in suspecting the culprit was a rogue gargoyle. Gillecomgain swears vengeance upon the whole gargoyle race.

The gargoyles aid Elisa in foiling a robbery on the subway by three street thugs. The passengers seem more afraid of the gargoyles than they are of the criminals.

Elisa is immediately smitten with Jason Canmore. Goliath is jealous when he realizes that Elisa is attracted to Jason.

Demona is posing as Dominique Destine during the day, and is head of Nightstone Unlimited. She interviews Robyn Canmore and makes her her personal assistant, unaware that Robyn is a hunter. After the thief tells Demona about the DI-7 fiasco, Demona decides to get the chemical herself.

Matt Bluestone interviews Xanatos about why anyone would want to steal DI-7. Xanatos is afterwards visited by Jon Canmore-posing as a news reporter from WVRN. He asks Xanatos questions about the gargoyles that were gone from the parapets, and takes a piece of stone skin off the ground. Xanatos speculates that Canmore will cause trouble for the gargoyles.

After the Hunters attack the gargoyles, Jon Canmore expresses his concern that all gargoyles might not be evil like Demona is, but Jason vehemently denies this.

"Yup, we call it the concrete-cure-all." - Elisa and Brooklyn

"I thought you said I wasn't supposed to believe everything I saw on television." - Hudson and Angela

Like "City of Stone", "Hunter's Moon" was originally intended as a direct-to-video release rather than part of the televised series.

To mark its nature as a "season finale" (and, to a certain extent, a "series finale"), "Hunter's Moon" contains a number of deliberate echoes of Season One, particularly "Awakening", as part of the concept that one of the best ways to end a story is to bring in the motifs from the beginning. Among these echoes are:

This is another good episode for cameos by the incidental characters. The three street thugs that were introduced in "Awakening: Part Three" and reappeared in "Avalon" Part One now return again here, to be foiled by the gargoyles and Elisa. The panicked subway passengers include Brendan and Margot, Billy and Susan's mother from "The Thrill of the Hunt", Art and Lois from "Protection", and the construction worker from "Vendettas". Officer Morgan is one of the policemen who arrest the street thugs. Elisa and Jason pass the Jogger during their car chase.

Elisa and Jason flirtatiously refer to each other "Bonnie" and "Clyde", a reference to the real life outlaw couple, Bonnie Parker and Clyde Barrow.

Xanatos makes a Mister Rogers' Neighborhood reference when he says to Alex, "Can you say 'harassment'? [Alex gurgles here.] I knew that you could."

The name "WVRN" for the television station that Jon Canmore works for in his "Jon Carter" identity becomes of note when one recalls where else in the series one has come across a name with those four consonants in it.

Brooklyn quotes an actual "advertising slogan" for Gargoyles when he proudly describes himself and his fellow gargoyles as "stopping evil stone cold".

Elisa uses her blond wig from "Turf" for a disguise again.