Difference between revisions of "Owen Burnett" 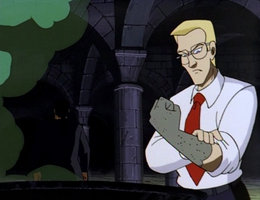 Owen Burnett is David Xanatos' loyal right-hand man, who skillfully and efficiently protects his employer's home and interests. In fact, he is an alter ego of the Child of Oberon known as Puck, who made a deal with Xanatos to provide him with a lifetime's loyal service as Owen, without any magical intervention.

Puck "created" the role of Owen Burnett after he discovered how Titania had taken on the role of Anastasia Renard: this intrigued him so much that he decided to create a human identity for himself. He therefore took on the identity of Owen Burnett, deliberately modeling this alter ego - in both appearance and character - after that of Preston Vogel (choosing Vogel for his "original" since he had never played a "straight man" before). Originally, Owen was an employee of Halcyon Renard at Cyberbiotics, but he quickly found Renard too "dull" for his tastes, and entered the service of David Xanatos instead, delighted and intrigued by Xanatos as a kindred spirit, a fellow trickster.

Not long after entering Xanatos' service, Owen revealed his true identity as Puck to his new employer, and offered him a choice: a single wish from Puck, or a lifetime of service as Owen Burnett. Xanatos chose Owen's service, much to Puck's surprise and interest. Since then, Owen has loyally served Xanatos in the role of his Executive Assistant, carrying out his work in a very efficient and admirable fashion. ("The Gathering" Part Two)

It was Owen who introduced Xanatos and Demona to each other, leading to the alliance which resulted in the re-awakening of Goliath and his clan.

Owen accompanied Xanatos to Wyvern Castle in 1994, and helped oversee its purchase and transportation to New York City. ("Awakening Part Two") When Xanatos was arrested for receiving stolen goods, Owen became the caretaker of the Eyrie Building. During this period, Owen continued serving Xanatos' interests, frequently meeting with Xanatos in prison. In particular, Owen was responsible for collecting a sample of Goliath's DNA under the pretense of salving the gargoyle's wound when a "rogue" Steel Clan robot attacked him. Owen also brought Macbeth to the Castle when the latter offered to "remove" the gargoyles for Xanatos, and chastised the old warrior when his battle with the clan damaged the building. He attempted to protect the Grimorum Arcanorum when Hudson and the Trio came to take it, even going so far as to draw a gun on them, but he was nevertheless knocked down and the Grimorum taken. ("Awakening" Part Five, "Enter Macbeth", "Double Jeopardy")

Even when Xanatos returned to the Castle, Owen remained a key player in all of his schemes. He successfully kept Elisa Maza out of the Eyrie Building when Xanatos wanted to test himself (and his new, red Steel Clan-type exosuit) in battle against Goliath. ("The Edge")

When Demona promised to cast a spell that would give her and Xanatos many more years of life, Xanatos told Owen to make sure she was keeping up her end of the bargain. When Owen realised that she had lied, and that instead she intended to turn all humans into stone throughout the night, he tried to contact and warn Xanatos. Even though Demona tied him up and forced him to watch, turning him to stone during the night as well, he was nevertheless instrumental in eventually defeating her, since he was able to reveal the following day that the spell would end "when the sky burns". ("City of Stone")

Owen was also present when Xanatos acquired the Cauldron of Life, and helped him kidnap the gargoyle Hudson so that they could use his stone skin to make a potion that would allow Xanatos to live "as long as the mountain stones". Although they successfully brewed the potion in the Cauldron, Hudson escaped before they could test it on him, and Owen volunteered himself as a test subject, dipping his left arm into the potion. The potion transformed his fist into solid stone, and it has remained that way ever since. ("The Price")

During this time, Owen remained aware that Anastasia Renard, Fox's mother, was really Titania. Following the birth of Xanatos and Fox's son, Alexander, Owen suspected that Titania might try to kidnap the child and set up a defensive system for the Eyrie Building in case of that attempt. This included constructing force field generators, and commissioning a new line of Iron Clan robots. Although a kidnapping attempt was made, in the end it was by Oberon and not Titania herself. At first he refused to get involved himself since he knew that, as Puck, he had earned Oberon's wrath for refusing to attend the Gathering, but he changed his mind out of loyalty to Xanatos and revealed his true identity. He was unable to fend off Oberon for long, but his presence (and a blast of magic from Fox) allowed Goliath to propse a compromise solution whereby Puck would remain in the human world to tutor Alex in magic, if Oberon and Titania would relinquish their claim upon the child. Oberon agreed to this, but stripped Puck of his powers except when he was teaching or protecting Alex, trapping him on all other occasions in Owen's form. And Puck has been trapped in the human world as Owen ever since. ("The Gathering" Part One, "The Gathering" Part Two)

At present, Owen still becomes Puck on regular occasions to teach Alex magic, and reverts to Owen after the lesson is over, even going back to the same apparent age that Owen was when Puck first "created" him. ("Possession")

This will change dramatically in 2198, when the grown-up Alexander, now Secretary-General of the United Nations, is abducted by the Space-Spawn alongside the rest of the human and gargoyle world leaders. Owen, at that time serving as Alex's Chief of Staff, resigns when Alex's successor makes it clear that he is uninterested in opposing the Space-Spawn, and joins forces with Samson and his resistance movement, secretly placing the assets of the Lexington-Xanatos Corporation at their disposal. Because of Alex's capture, however, Owen has no occasion henceforth to become Puck - it's too late to protect him and he can't teach him anything - and is trapped as Owen.

Owen Burnett is a smart, well-dressed man. He strongly resembles Preston Vogel. He is a skilled practitioner of judo, one time even beating David Xanatos in a sparring match. ("The Edge") His most distinguishing feature is his left hand, which was turned to stone in the shape of a clenched fist, and which he has used on occasion to deliver powerful punches. ("The Price") Most people consider his fist to be an eccentric prosthesis.[1]

Although, as Puck he is a member of the Third Race, as Owen he is subject to all the usual limitations of a human. He is unable to use magic, except to change himself back into Puck, and following Oberon's edict he can now only change back to Puck when training Alexander how to use magic. He is also vulnerable to magical assault (as demonstrated by Demona's turning him to stone by night). Also, if Owen were to actually be killed, Puck would die with him. These limitations are partly due to the general limitations of a Child of Oberon in a human body, but, more significantly, also due to Puck's deal with Xanatos. Since Xanatos chose Owen's mundane services rather than a wish from Puck, Owen has to adhere to this, and cannot use his magical abilities as Puck to assist Xanatos in any way. ("City of Stone", "The Gathering Part Two")

Despite this, every time Owen transforms into Puck and back again, he resets Owen's age to the age he was when he first made the deal with Xanatos. The only part of himself that does not reset completely is the stone hand: because of the aforementioned deal with Xanatos he cannot (or will not) undo that condition, so his hand remains stone permanently.

In the show's comedy development, Owen was originally known as Mister Owen, and was a human turned into an anthropomorphic aardvark, while working for Xavier.

The writers of Gargoyles knew that there was some secret in Owen's background, but during the first season they weren't sure what that secret was. During the production of the episode "The Mirror", which introduced Puck, Greg Weisman suddenly realised that Owen and Puck had to be the same person. He immediately phoned up Lydia Marano (the writer) and Brynne Chandler (the story-editor) to tell them that "Puck is Owen!" Their response was "We know!", confirming that they were on the right track.[2][3][4]