From GargWiki
(Redirected from Tyrant)
Jump to: navigation, search 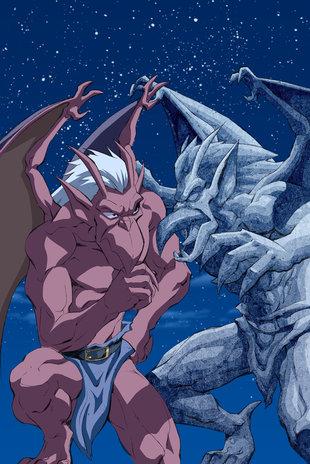 "Tyrants" is the eleventh issue of the Gargoyles comic by SLG, and Chapter Eleven of the Clan-Building story arc.

On August 31, 2008, SLG's license to produce single issues of the Gargoyles comic ended. The material that would have made up single issues nine through twelve is included in the trade paperback collection Gargoyles: Clan-Building, Volume Two.

"Clan-Building," Chapter 11: Tyrants. A TimeDancing Brooklyn from the present comes face to face with his past self, frozen in stone for a thousand years! Can he team with a pair of faux sorceresses to save himself, his clan, and the Grimorum Arcanorum that will someday set them all free?

We left Brooklyn stranded in Scotland in the year 997, traveling with Mary and Finella, wondering how he could return to his own time. Reuniting the pieces of the Phoenix Gate seemed the best hope - so the three of them set out for Castle Wyvern to reclaim Goliath's half.

Unfortunately for Brooklyn, Goliath's pouch turned to stone with him, rendering his half of the Gate past Brooklyn's reach. Brooklyn's only consolation is that he won't have to confront Demona for her half now. But he finds the old castle an unsettling place - first from a comedic standpoint, as he looks at himself in stone sleep (an image I had long pictured, before the comics even came out) and then, on a more solemn note, as he sees the remnants of his fellow clan members after the Viking massacre, still strewn about three years later.

Since he's stranded in the past, Brooklyn decides to accept it and join forces with Kenneth and his army. Aware that they need more than one gargoyle, however, he realizes that he shall have to seek out Demona after all, despite his dislike for her.

Demona lives up to our expectations - while she has not undergone the full thousand years of solitude and bitterness, she still shows so many of her familiar traits. She is filled with anger towards the humans who slaughter her kind, to such an extent that her first thought is to seek revenge rather than to hold a Wind Ceremony for the dead - yet, when she meets Brooklyn, we glimpse some of her vulnerability as she frantically lies about her whereabouts during the Wyvern Massacre, still gripped with the unacknowledged guilt over her part in it.

Brooklyn is all the more uneasy about gaining an alliance with her, for he does not even know the events in 997 well enough to tell if he's doing the right thing. At one point, he even breaks the fourth wall for a moment, advising the readers to study history just in case they find themselves in a similar plight (whether this moment is funny or awkward depends upon your tastes).

We see more of Constantine as he makes Gillecomgain his squire (not to Mail Brigti's liking), and applies warpaint to his head in a precursor of the Hunter's mask - though, in an unsettling detail, with eyes painted on the back. (Even the Hunters' masks were not this creepy!) He shows his villainy all the more as he puts to death Kenneth's herald, against the rules of medieval warfare (even Mail Brigti appears unsettled by this act).

Battle is joined in a satisfyingly great moment - especially when Demona's gargoyles arrive. But we learn on the last page that Demona is plotting treachery against the humans on both sides (not surprisingly) - and Brother Valmont makes his own, equally treacherous bid for power....

Constantine's shaving his head is based on his historical nickname, "Constantine the Bald".

Constantine's mention of "the three brothers" (whose bloodline he plans to eliminate) is an allusion to "Once Upon A Time There Were Three Brothers...", Greg Weisman's prequel tale to the spin-off Gargoyles: The Dark Ages.

Brother Valmont's report to Constantine that, according to the entrails of the goats he's read, Princess Katharine, the Magus, and Tom "have left this world" - which indeed they have, being on Avalon - indicates that divination magic works in the Gargoyles Universe.

The Humility Spell and Wind Ceremonies are mentioned in canon for the first time.

In his memo for "Vows," Greg Weisman initially explained Goliath hiding away his half of the Phoenix Gate a thousand years ago inside a hollow brick at Castle Wyvern and retrieving it before moving to the Clock Tower.

"Sruighlea", after which the Sruighlea Cell was named, is the Gaelic name for Stirling, a major historic town in Scotland.

The two gargoyle beasts in Demona's clan are Bronx's biological parents. The gargoyle child who suggests holding a Wind Ceremony for the slaughtered cell is True, the youngest of Hudson's biological children.