Difference between revisions of "Hyena" 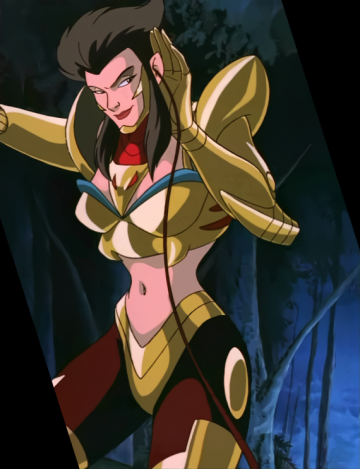 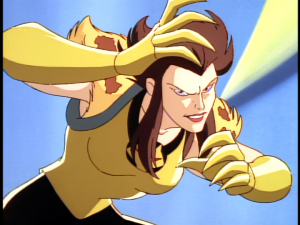 Hyena is a member of the Pack, and the twin sister of Jackal. The pair are noted for their deadly swiftness and accuracy, and they are rarely seen apart.

Along with Jackal, Hyena was a mercenary before being recruited by Fox. [3] As members of the Pack, Jackal and Hyena eagerly hunted the gargoyles when they first appeared in New York. They targeted Goliath and Lexington when the latter wanted to make a friendly connection with the Pack members. After the Pack was defeated, Jackal and Hyena managed to escape arrest at the end of that encounter, but their packmates Fox and Wolf were caught and put into prison. ("The Thrill of the Hunt")

Afterwards Hyena and Jackal continued to work for Fox, with Xanatos behind the scenes, receiving orders even though Fox was incarcerated. On her instructions, Hyena and Jackal went to the Diamond Exchange to steal the Coyote Diamond. Xanatos purchased it first, and they tried to steal it from him, but were foiled in part by the timely arrival of Elisa and Derek Maza (who were lured there by Xanatos). Fox next ordered them to assassinate Xanatos for interfering, which they attempted to do, but were foiled once more, this time by the gargoyles. (In fact, Fox had been using them without their knowing it as part of a scheme to lure Derek into Xanatos' service; Jackal and Hyena were intended to fail all along). This time, they were captured and sent to prison on Rikers Island, alongside Fox and Wolf. ("Her Brother's Keeper")

Hyena, Jackal, and Wolf were broken out afterwards by Dingo and Coyote 1.0, and proceeded to battle the gargoyles again, meeting with defeat once more. ("Leader of the Pack") Desirous of being able to finally wreak vengeance upon the clan, Hyena voluntarily became a cyborg (as did Jackal), becoming outfitted with mechanical parts, but even this was not enough to defeat the clan. ("Upgrade") After the Pack's third defeat at the gargoyles' hands, Hyena fled from New York to Egypt alongside Jackal and Wolf, with some help from Xanatos. There she and her packmates encountered Goliath and his companions from the Avalon World Tour, and she was also temporarily transformed into a baby by Jackal when he became an avatar for Anubis. ("Grief")

Afterwards, Jackal and Hyena parted ways with the rest of the Pack, and eventually came to Guatemala, where they were employed by Preston Vogel (who was managing Cyberbiotics at the time) to destroy the Mayan gargoyles. Jackal sent Hyena to the American Museum of Natural History in New York to destroy the Mayan Sun Amulet, rendering the Mayan gargoyles helpless during the daytime. Fortunately, before she could destroy it, Lexington and Broadway arrived to defeat her, and afterwards arranged for her to be captured by the police. ("The Green")

In 1997, Hyena was broken out of prison by her brother and caused mayhem with him and Wolf in Times Square. ("Phoenix")

At some point in the future, Hyena will, with Jackal, join the Ultra-Pack, possibly after another (undetailed at present) upgrading. [4][5]

Hyena shares Jackal's bloodlust and twisted sense of humor; she is particularly notorious for her cackling laugh. Unlike her brother, she seems unable to control or hide her impulses, making her something of a psychopath. [6] She also has a constant crush on the various Coyote robots that have worked alongside the Pack, something which disturbs even Jackal.

When asked what Jackal and Hyena's real names are, Greg Weisman responded with "Jack and Hanna" before admitting he was kidding unless he later decided those names really amused him. [8] Although, it is probably worth mentioning that storyboard artist, Vic Cook's kids are named Jack and Hannah. [9] Another time, he posited in jest that her real name was Heidi. [10]

Fox took Broadway to Hollywood to help improve the relations between humans and gargoyles, which prompt The Quarrymen to hire Jackal & Hyena to sabotage her efforts. They are both defeated by Fox and Broadway. ("Broadway Goes to Hollywood") 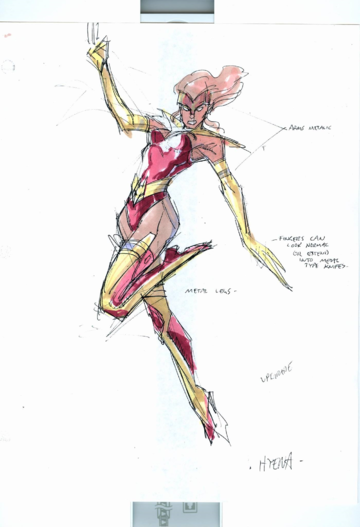