From GargWiki
(Redirected from Wyvern clan)
Jump to: navigation, search 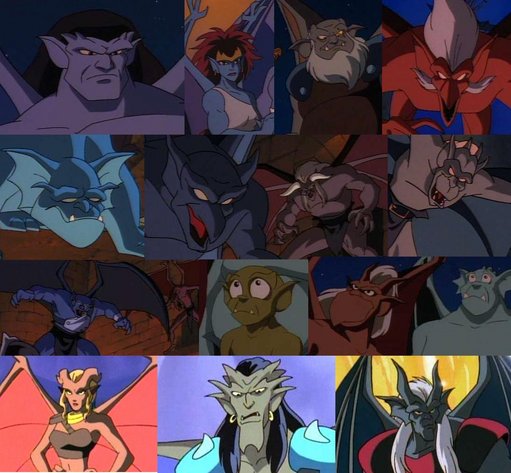 Some of the Wyvern Clan members in 994.

This article is about the original Wyvern Clan. For other clans using the name, see Wyvern Clan (disambiguation).

Wyvern Clan - A gargoyle clan living in Scotland until they were destroyed in 994 AD.

Almost nothing is known about the origins of the Wyvern Clan, though they had probably settled in the caves and on the cliffs of Wyvern Hill before recorded history. They turned one of the larger caverns inside the jagged cliff into their rookery and slept upon the cliff itself, perhaps in some older ruins above the rookery (during this time they did not build any of the known structures or shelters themselves). [1] It is likely they lived by hunting and gathering, particularly in the nearby forest, and had only limited contact with other gargoyle clans (probably the Loch Ness Clan and possibly the Scone Clan and other extinct clans as well). [2][3] Due to their remoteness they probably had very little contact with humans. In the mid 900's however, the Scottish soldier Robbie had met the Wyvern Clan and by 967 had befriended its leader, the gargoyle later to be known as Hudson.

Robbie, feeling the Wyvern gargoyles were "rougher" and "harder" than other Scottish gargoyles he had encountered and capable warriors introduced them, and Hudson in particular, to Prince Malcolm in 971 and secured an alliance between them. This alliance led to both the enthronement of Malcolm's brother Kenneth upon the Scottish throne and the building of Castle Wyvern. The Castle, which was built directly above the rookery, possibly on the foundation of the older ruins, was quickly constructed. With help from the gargoyles and probably the Archmage, construction started in 971 and was completed by 975 at the latest. ("Once Upon A Time There Were Three Brothers...")

For two decades, the alliance between the humans and gargoyles remained strong. Robbie became the Captain of the Guard and remained the Clan's strongest human ally. The human soldiers loyally defended the gargoyles during the day and the gargoyles watched over the castle and the humans there by night. The Clan began to grow strong in number, so much so that sometime between 988 and 994 a large group of gargoyles from the Wyvern Clan set off on their own to form a new clan elsewhere. [4] It is likely that not only could the castle no longer support such a large clan, but the humans were becoming intolerant of their large numbers as well. [5]

After Prince Malcolm and his wife, Princess Elena died, their daughter, Princess Katharine took over command of the castle. Katharine was distrustful and afraid of the gargoyles and over time, her human subjects, including the Magus, began to take the Clan, and their protection, for granted. Worse, they were openly hostile to the Clan, though never going so far as to attack or destroy them. Tension grew between the humans and gargoyles. In 994, following a Viking attack, the second-in-command of the Clan (now known as Demona) and the Captain formed a plan. Demona would arrange for the gargoyles to desert the castle at night and allow the Vikings to sack it, leaving an empty castle for the Clan to live in alone. Goliath, who was the leader of the Clan, did not want to leave the castle unprotected, and so when the Vikings attacked and took the castle during the day, most of the Clan was destroyed by Hakon, the Viking leader, in what is known as the Wyvern Massacre. ("Awakening Part One", "City of Stone Part One")

Goliath mourns the destruction of his Clan.

Fortunately, there were some survivors. Goliath and Hudson had been on a mission to scare away the Vikings when dawn came, and thus were not destroyed during the attack; Demona, not trusting the Captain, had fled and slept at the base of the cliff of Wyvern Hill; and four young gargoyles (including the Trio and the gargoyle beast now known as Bronx) were hidden away in the rookery with the eggs of the Clan. The Vikings never went into the rookery because there was nothing of value to them there, and they were not trying to eradicate the gargoyles, but rather make sure that they were not pursued by them, so the eggs were no threat.

The remaining Wyvern Clan (not including Demona) would go on to rescue the humans of Wyvern and later that night were placed under a spell by the Magus which caused them to sleep until the castle rose above the clouds. Demona would go off on her own as a rogue gargoyle, but would eventually form a new clan, and the thirty-six eggs in the rookery were entrusted by Goliath to Katharine, who took them away to Edinburgh Castle. The Wyvern Clan was no more. ("Awakening Part Two", "City of Stone Part One", "Avalon Part One")

Though the Wyvern Clan was destroyed, it lives on in many ways in the present. Goliath and the others would eventually awaken and become the Manhattan Clan, and the eggs of the last rookery would grow to become the Avalon Clan. Later, the Wyvern survivors would be cloned to create the Labyrinth Clan. ("The Reckoning")

Future descendants of the Wyvern Clan will most likely become members of the Camelot Clan, Liberty Clan, and Notre Dame Clan, and no doubt some of the gargoyles that will re-colonize Wyvern Hill to form the new Wyvern Clan will be descended from the old one. [6]

Gargoyles of this clan come in many shapes, sizes, and colors. Most of them have wings attached to their backs, but a minority have wings connected not only to their wing limbs, but their arms and legs as well. The individuals with wings on their backs still show quite a variety in wing type, though generally they all have four fingers or less per wing, and all have shown a bat-like wing structure. Likewise, there is much variation in brow and horn types. Some gargoyles have no horns at all, just a brow ridge, while others have large horns or head crests. Skin and hair coloring is diverse as well. Other notable features in this clan are the occasional clubs or spikes on the tail, and some instances of a complete lack of hair. Spikes have also been seen on cheeks, elbows, knees, forearms, knuckles (of fingers and toes), and shoulders. Overall, this is a clan of much diversity.

The gargoyle beasts in this clan also show a wide variety of forms, though as of yet, none have been seen that possess hair.