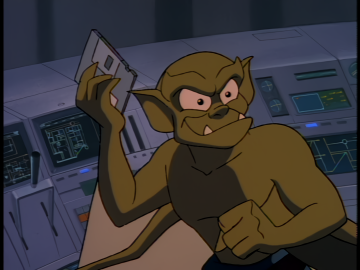 Like his rookery brothers Brooklyn and Broadway, Lexington was hatched in the Wyvern Clan rookery in the year 958. [1] He and they became close friends during their childhood, thus forming the trio. They and Bronx survived the Wyvern Massacre of 994 thanks to their having been confined to the rookery for getting into a fight with some of the humans, and so were not found and shattered by the Vikings. Lexington and the others, however, were afterwards turned to stone by the Magus, and remained in stone sleep for a thousand years, finally awakened when Xanatos moved Castle Wyvern to the top of the Eyrie Building. ("Awakening: Part One", "Awakening: Part Two")

Lexington was fascinated by the modern world, and particularly its technology, and remains so still. Even before his long sleep, he was intrigued by complex mechanical devices, such as the catapults that Hakon and his Vikings used to attack Castle Wyvern. [2] Upon his awakening, he eagerly investigated the technological devices of New York in the 1990s, such as computers (Xanatos donated the laptop that Lex is typically seen with at the Clock Tower, and Lex went back for it when the clan originally left the Eyrie Building) and Vinnie's motorcycle (with disastrous consequences for both the motorcycle and Vinnie). [3] He also learned how to construct a motorcycle out of spare parts (although it blew up not long afterwards), and later rebuilt the Pack's helicopter to make it more effective to be able to capture Jackal and Hyena. ("Awakening: Part Three", "Temptation", "Her Brother's Keeper")

Lexington has since become the clan's technical expert, who works out how to disarm advanced security systems, access information from computers, and so on, whenever the clan needs his help with such things. He successfully repaired an old refrigerator for the Clan's use in the Clocktower, but had less success in repairing the comatose Coldstone. [4] He also tinkered constantly with the old mechanics of the Clocktower's clock such that it only worked occasionally during the Clan's occupancy there. [5] 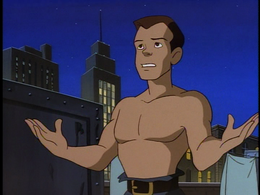 Lexington as a human.

Lexington’s feud with the former Pack member Fox has cooled somewhat, however, thanks to a third keystone in his life; his close friendship with Alexander Xanatos. Lexington and Alex first developed their rapport when Alex temporarily possessed him in order to use his body and voice to cast "soul transference" spells involving the Coldtrio. ("Possession") Lexington warmed to Alex as a result and this process deepened further after the clan moved back into the castle. For Alex's sake, therefore, Lexington has made peace with Fox, though he still is suspicious of her. ("The Journey", "Rock & Roll") His current attitude towards Dingo is unknown, although it is safe to assume that he still dislikes Jackal, Hyena, and Wolf, the three unreformed members left of the original Pack.

In November of 1996, Lexington, along with Hudson, elected to go with Macbeth when the latter sought the clan's aid in safeguarding the Stone of Destiny during its transport from Westminster Abbey in London to Scotland. After a delayed awakening in London, both Lexington and Hudson got a taste of the gargoyle version of jetlag ("The Rock"). Lexington and Hudson later met up with Griff and two other gargoyles of the London Clan; Constance and Staghart, who, along with King Arthur, arrived for the same purpose: to protect the Stone. The group of gargoyles was later attacked by Coldsteel, Coyote 5.0, and a Steel Clan and Iron Clan robot as an elaborate distraction designed by Xanatos. During the battle, Lexington saved Staghart from Coyote's laser blast only to be saved by Staghart a short time later. In the end, the Stone was safely returned to Scotland (or so they thought) and Lexington (who was curious about the London Clan) along with Hudson, Coldstone and Coldfire decided to stay at Knight's Spur for a time and get to know the English gargoyles better. ("Rock & Roll", "Rock of Ages")

Several months later, Lexington and his clanmates returned to Manhattan and their Clan on the same night that Brooklyn disappeared and reappeared with Katana, Nashville, Fu-Dog and Egwardo. After a joyous reunion, the entire clan headed off to Times Square to face the remaining members of the Pack with Lexington proclaiming that "The Pack'll never know what hit 'em." ("Phoenix")

Lexington seems to have formed a strong friendship bond with Staghart, whom he's elected to call "Amp". At CONvergence 2014, Greg Weisman revealed that once back from Europe, Lexington would eventually start chatting with Staghart online with the username "Tin Man".

Lexington is also greatly dismayed by the choice of his clone Brentwood to join Thailog willingly. It is likely that Lex view's Brentwood's actions as a reflection upon himself and his dark side in particular. ("Bash", "Reunion")

Lexington will be "very involved" in the saving of Alex when Raven kidnaps him. [6]

At some point in the future, Lexington will play a part in the founding of the Lexington-Xanatos Corporation. The details for this are as yet unknown, however - beyond the fact that the LXM robots, which this corporation will be manufacturing by 2198, are modeled after him in appearance. Aside from going into business in 1999, other events in Lex's future include facing an extremely hostile takeover in 2000, holding a press conference in 2003, taking a chance and losing in 2005, and continuing his journey in 2007. [7][8][9][10][11] 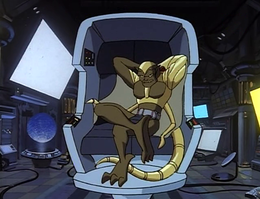 Weisman has noted that reflections of this vision of Lexington's fate in future stories may also be depicted in his clone, Brentwood, who has openly aligned himself with Thailog. [12]

Lexington is the smallest of the trio, and because of this, his large eyes and his reedy voice, looks younger than he really is. His most distinguishing feature is his wings, which are attached to his arms in a web-like structure, evocative of the wings of a flying squirrel. When he desires, Lexington can fold his webbing to allow him to wear regular human clothing, but he must remove them in order to glide. His wings are pierced, which allows him to wear a loincloth. [13] He has khaki-colored skin, and a hairless head. Greg Weisman has revealed that Lexington is gay, "although he hasn't fully realized [it] yet." [14][15] Greg did confirm at CONvergence 2011's Gargoyles Panel that Lex has a crush on Staghart. 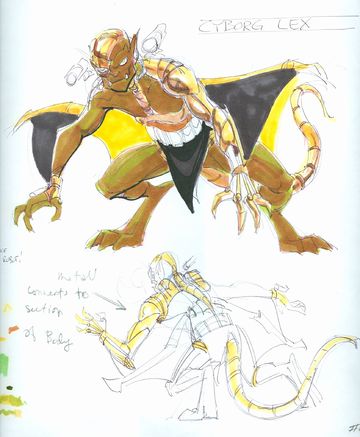 Lexington has the distinction of being the one character always featured (with his laptop) on the Main Page of the GargWiki. He also has the last line in "Phoenix" and thus currently the last line in the Gargoyles Universe canon.