From GargWiki
(Redirected from Shakespeare, William)
Jump to: navigation, search 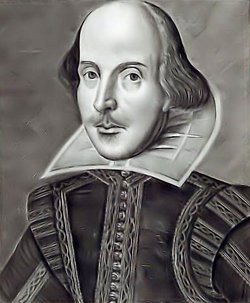 William Shakespeare was a noteworthy English poet and playwright (1564 - 1616). Shakespeare is famous for the many great plays that he has written, including Macbeth, A Midsummer Night's Dream, Othello, Romeo and Juliet, Hamlet, King Lear, The Tempest, and more. The Manhattan Clan discovered his works not long after their awakening - and have also encountered a number of his characters, such as Macbeth, the Weird Sisters, Oberon, Titania, and Puck.

Shakespeare was good friends with Macbeth, although he did not know Macbeth's true identity. [1] Shakespeare and Macbeth probably had tea together at Into the Mystic in London or were drinking buddies. [2][3] Macbeth was amused by his friend's take on his life story, rather than offended. [4]

Other characters from his plays known to exist are Queen Mab, Prospero, Ariel, and Caliban. [5][6] Tamora has also been called a "Gargoyles character in the making". [7]

Shakespearean references in the Gargoyles Universe are common, thanks to Greg Weisman's fondness for the Bard. Not only have Macbeth, the Weird Sisters, Oberon, Titania, and Puck appeared directly in the series, but a few other characters are parallels to Shakespearean figures, such as the Coldtrio to Othello, Desdemona, and Iago or Dingo in Bad Guys to Prince Hal. "Strangled" and "Losers" introduced modern-day namesake counterparts to Falstaff and his circle into the Gargoyles Universe. One of the female gargoyles on Avalon bears the name Ophelia, and a number of Shakespearean lines have been quoted or adapted in the course of the series.

Greg also planned to reflect Shakespeare in future episodes, not only through the introduction of Queen Mab and Prospero, but also by making Terry and Sphinx a parallel to Romeo and Juliet in the The New Olympians spin-off. He even once suggested a two-parter where the characters were trapped in a live performance of Macbeth, with Macbeth playing his namesake, Demona as Lady Macbeth, Goliath as Macduff, Elisa as Lady Macduff, and Hudson as Duncan (the higher-ups at Disney rejected it as a two-parter, and Greg felt the story would never fit into a single episode).